Preparations…….. Arriving back in Bangkok late from our previous tour, there’s just two full days to prepare for the next, thankfully much shorter that the one just ended. Preparations start almost immediately with confirmation of a flight. Katoon decides to do a load of washing even though its nearly evening. It can hang out to dry overnight. The next day another load gets done and by evening things are up to date leaving the last day free and it’s just as well she did.
At the residence there’s no air-conditioning and temperatures in the room soar in the afternoon. I stick it out as long as I can trying to get my notes tidied up from the last trip but my organs begin to overheat and strange sounds appear! Feeling feverish I head upstairs to the only room with air-conditioning consuming huge amounts of cold water in the process.
If I don’t take precautions now, I might not be able to travel, baring in mind my 30 days concession will expire in a few days. After 24 hours virtually locked up in the room, the symptoms ease and I begin to eat normally again. That was a worry! I now have to get things ready for a very early start tomorrow. That shouldn’t take long. 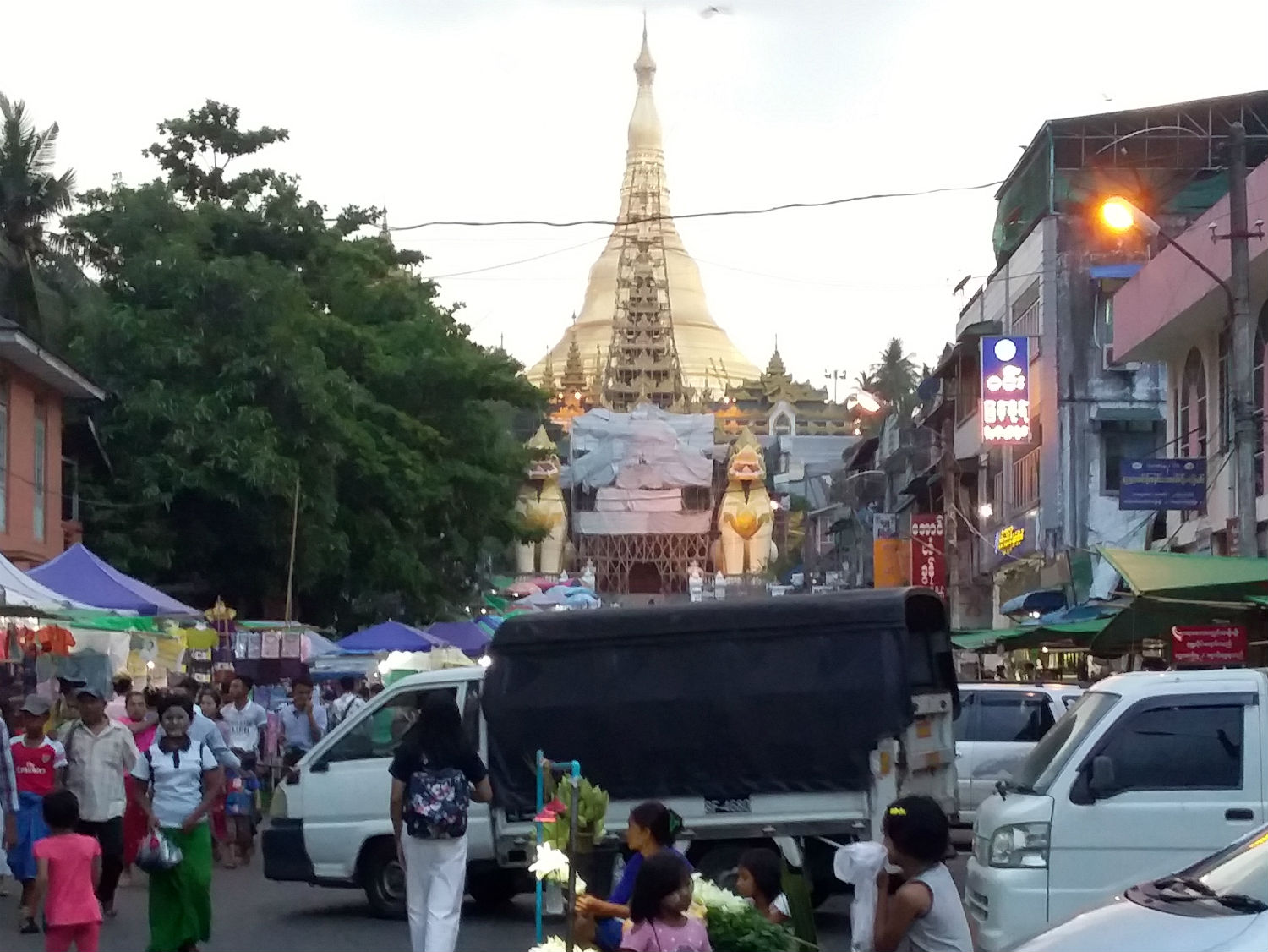 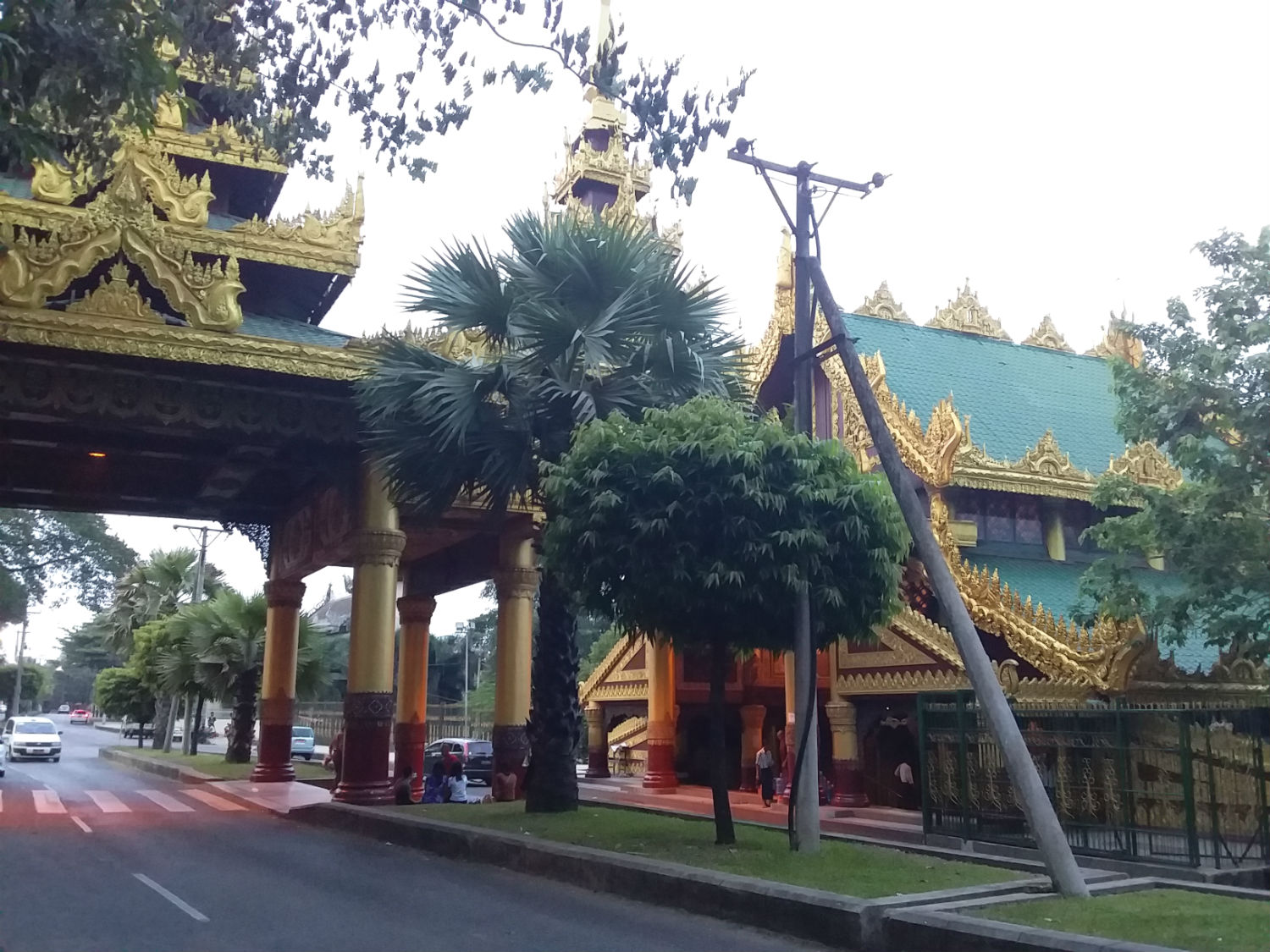 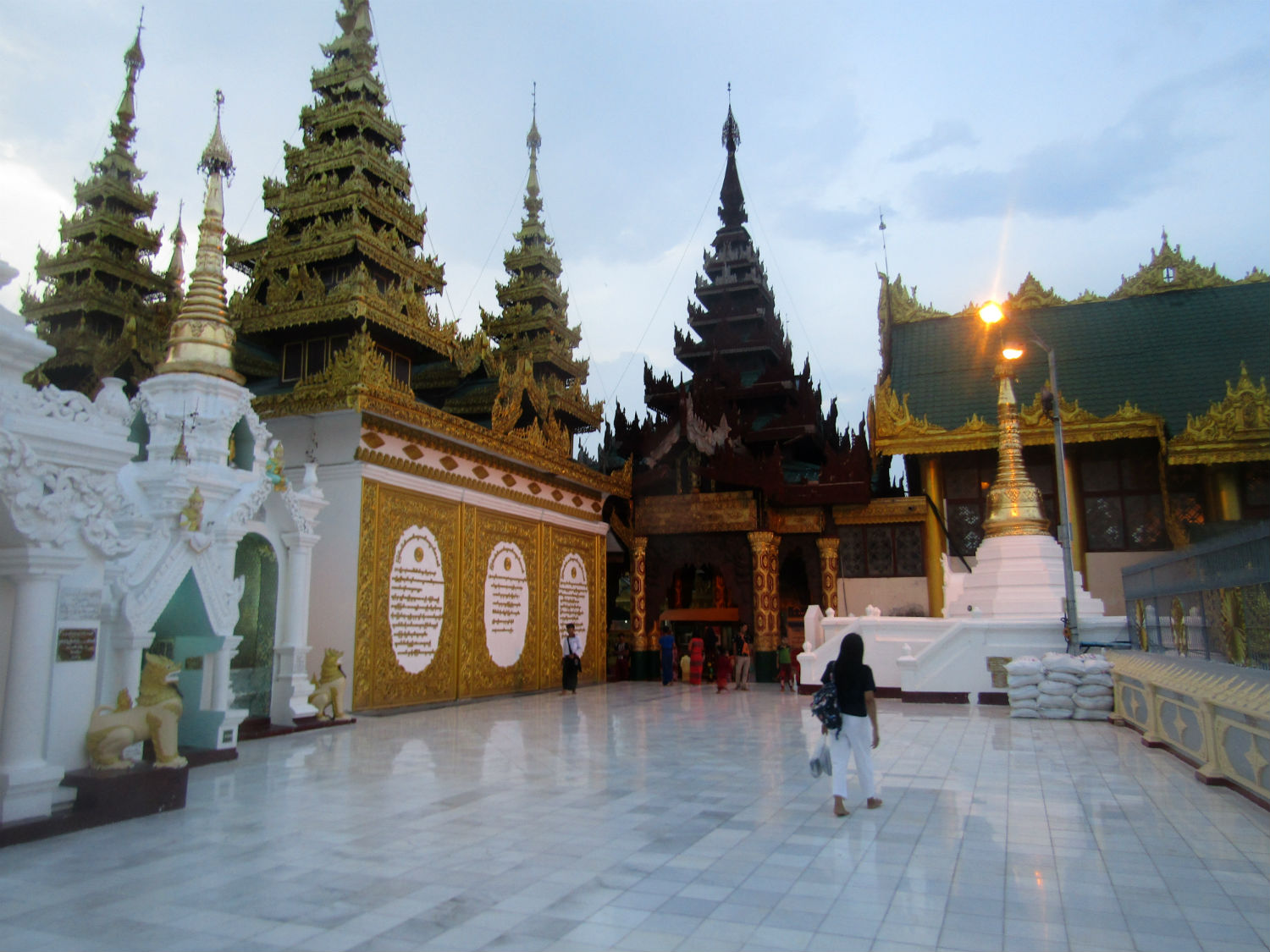 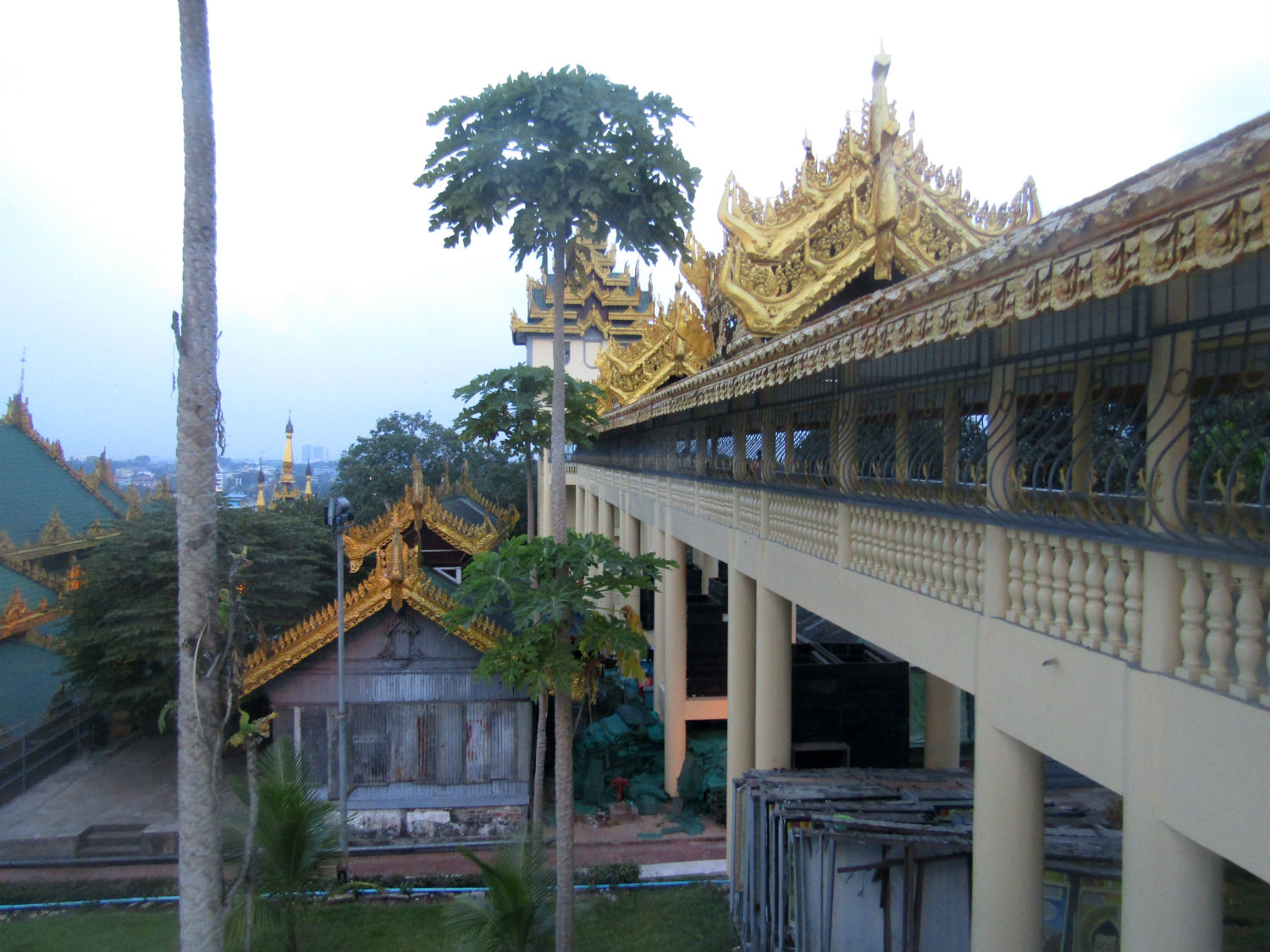 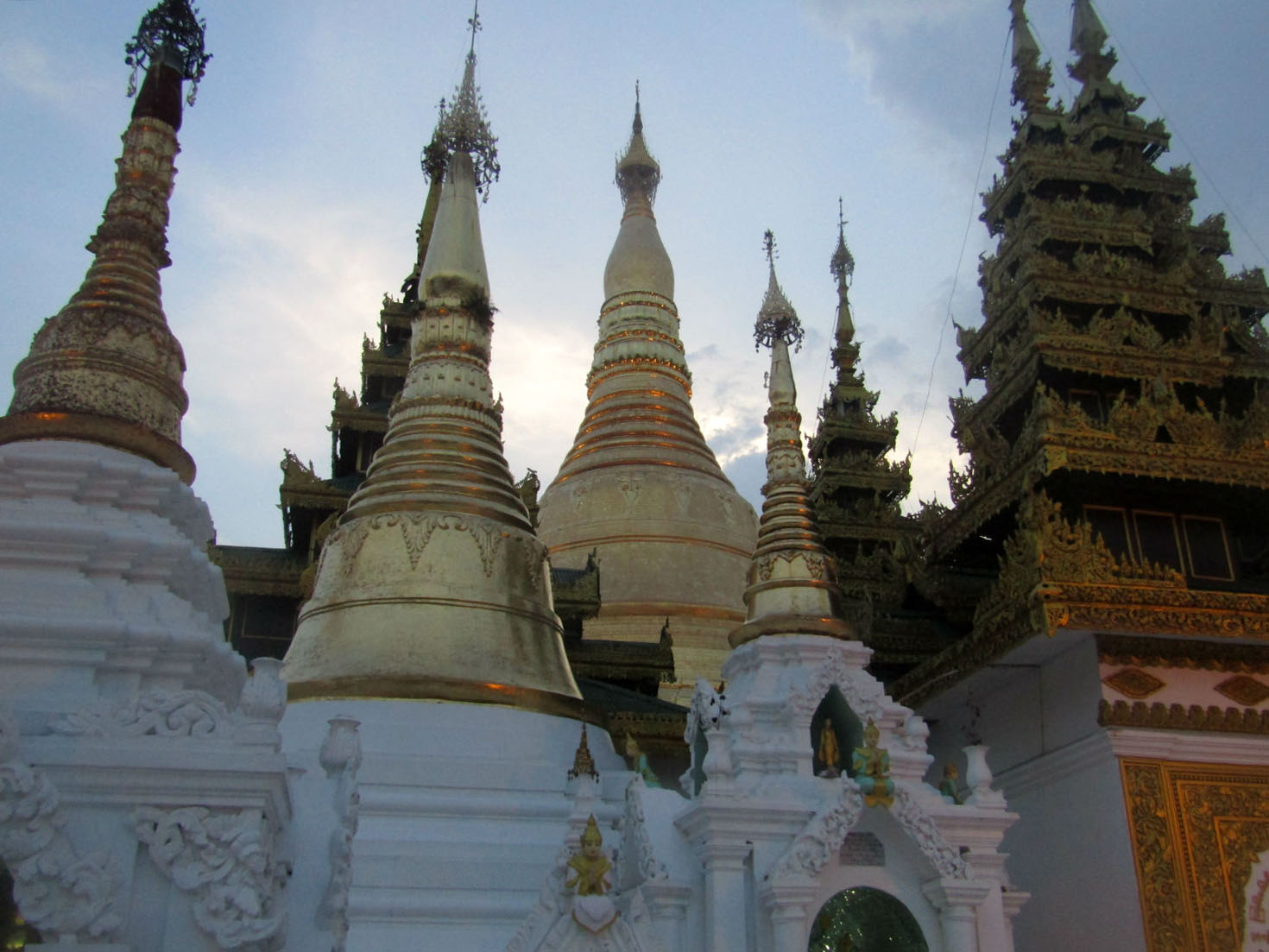 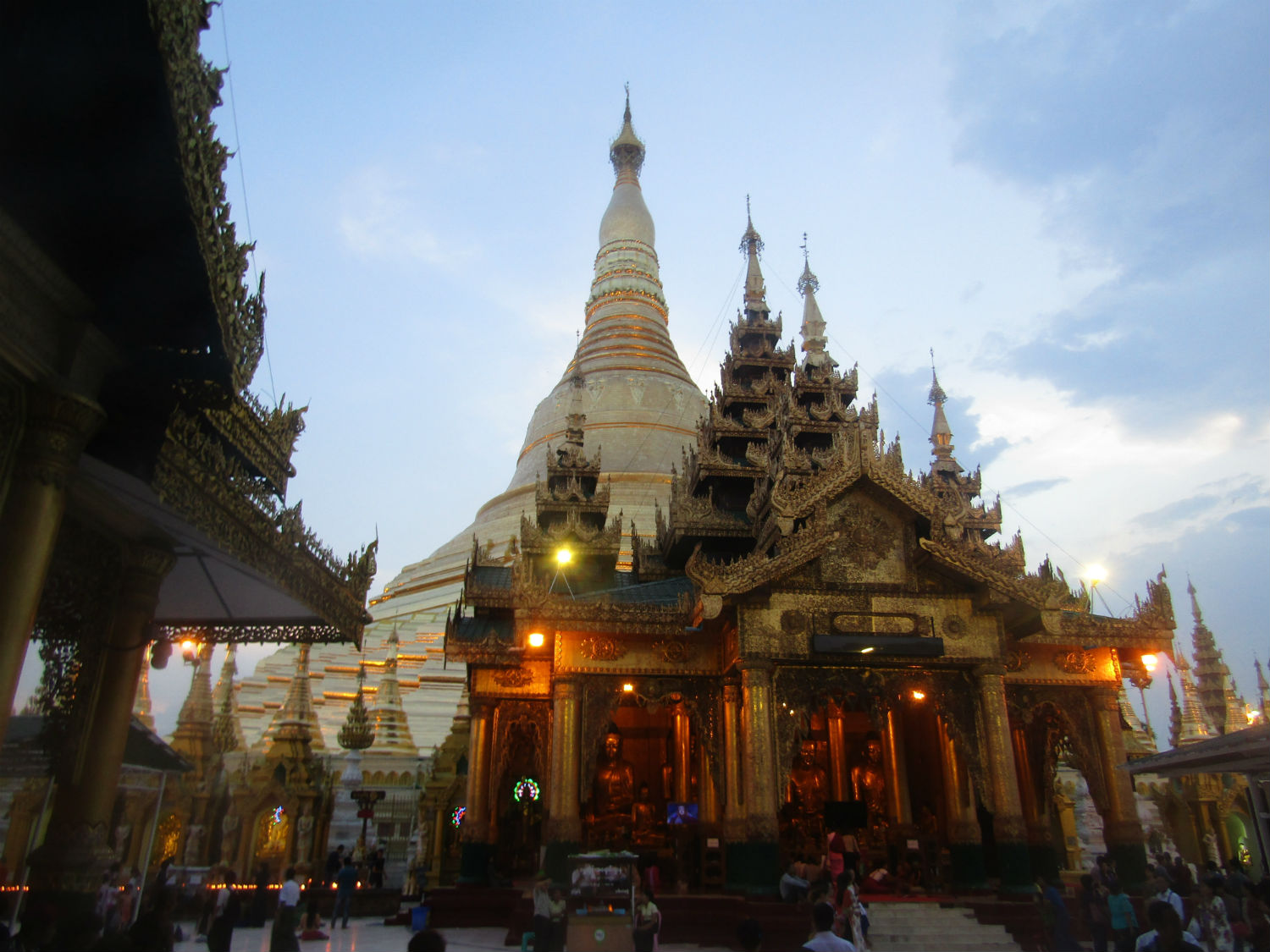 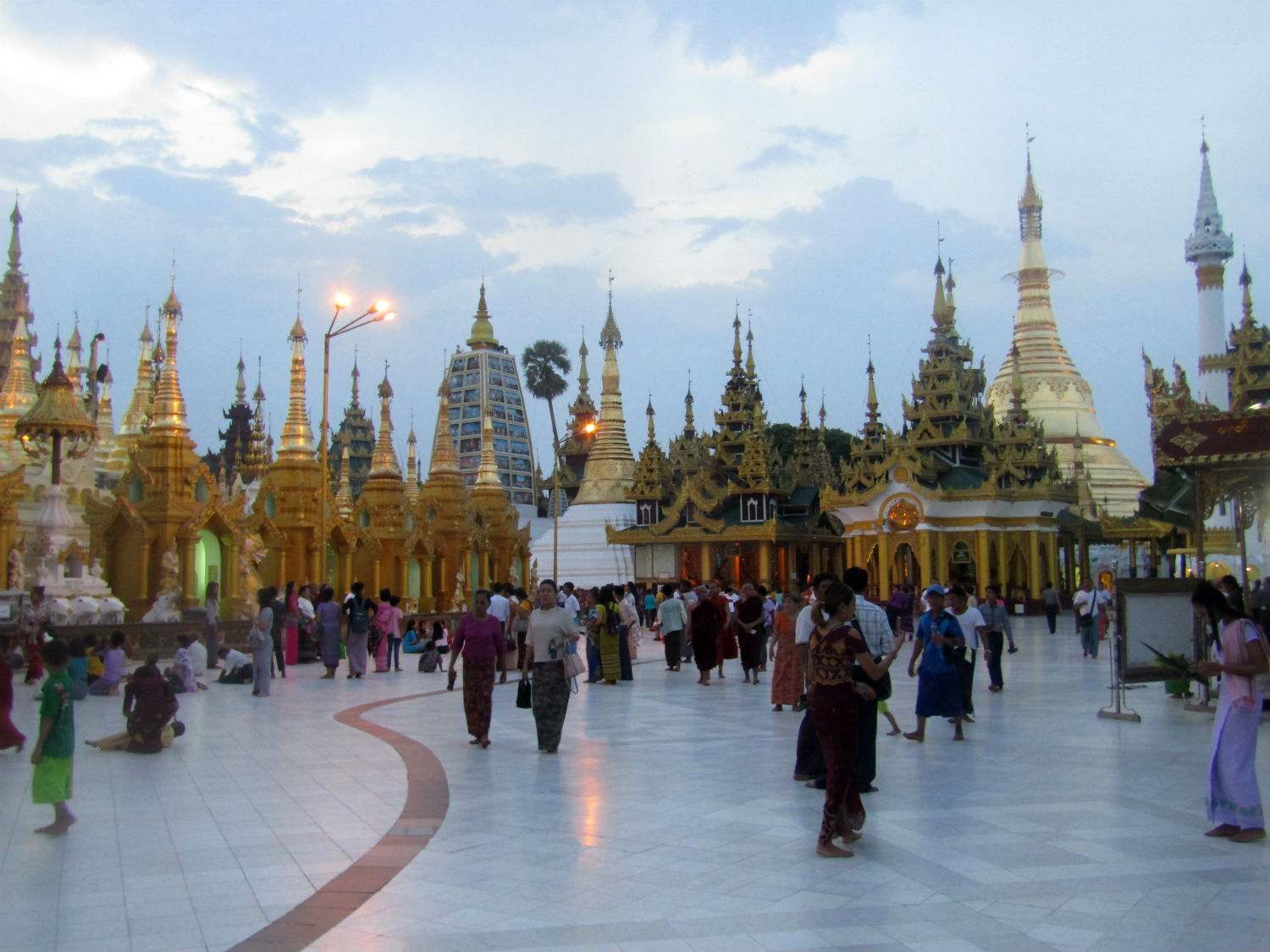 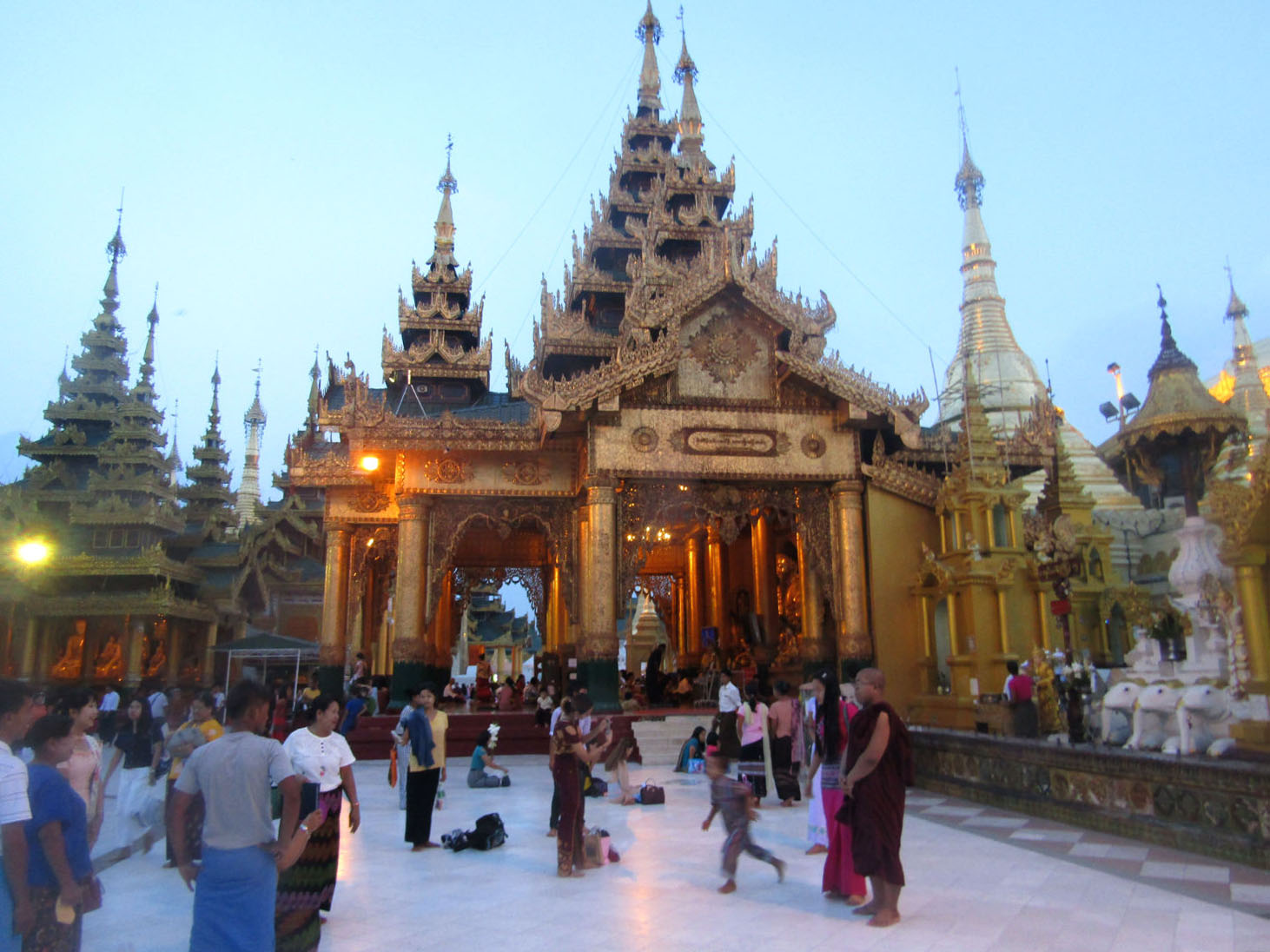 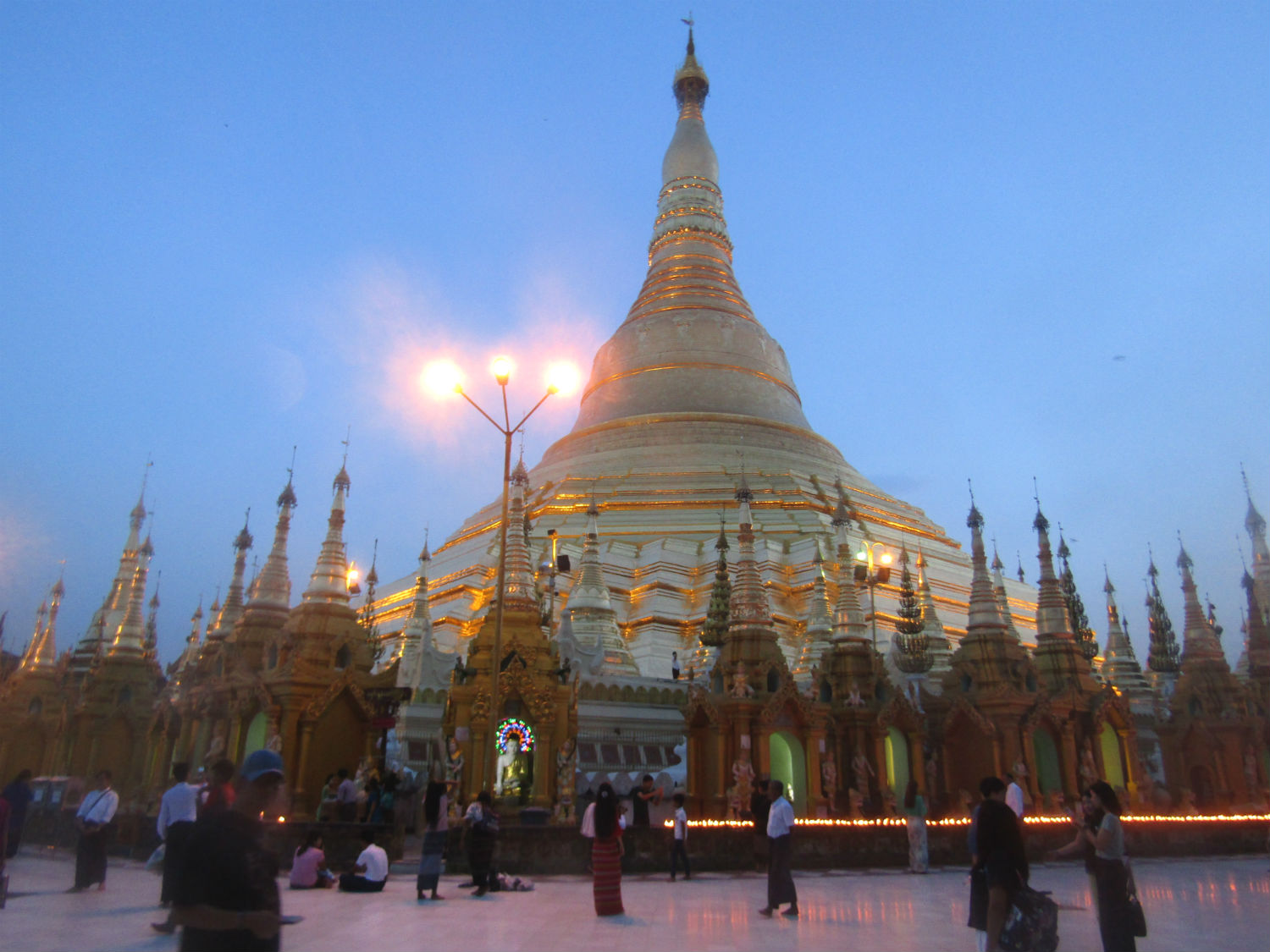 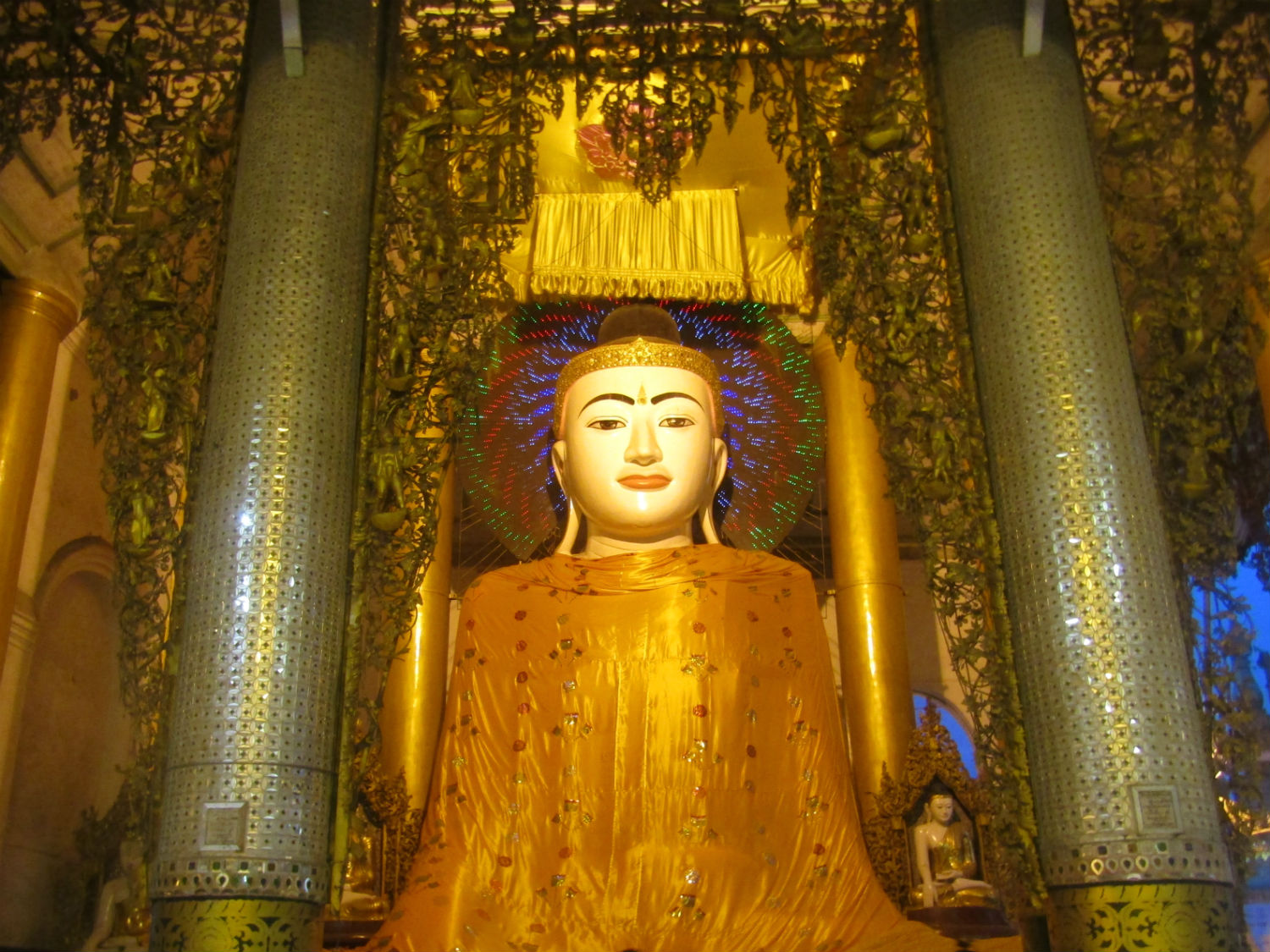 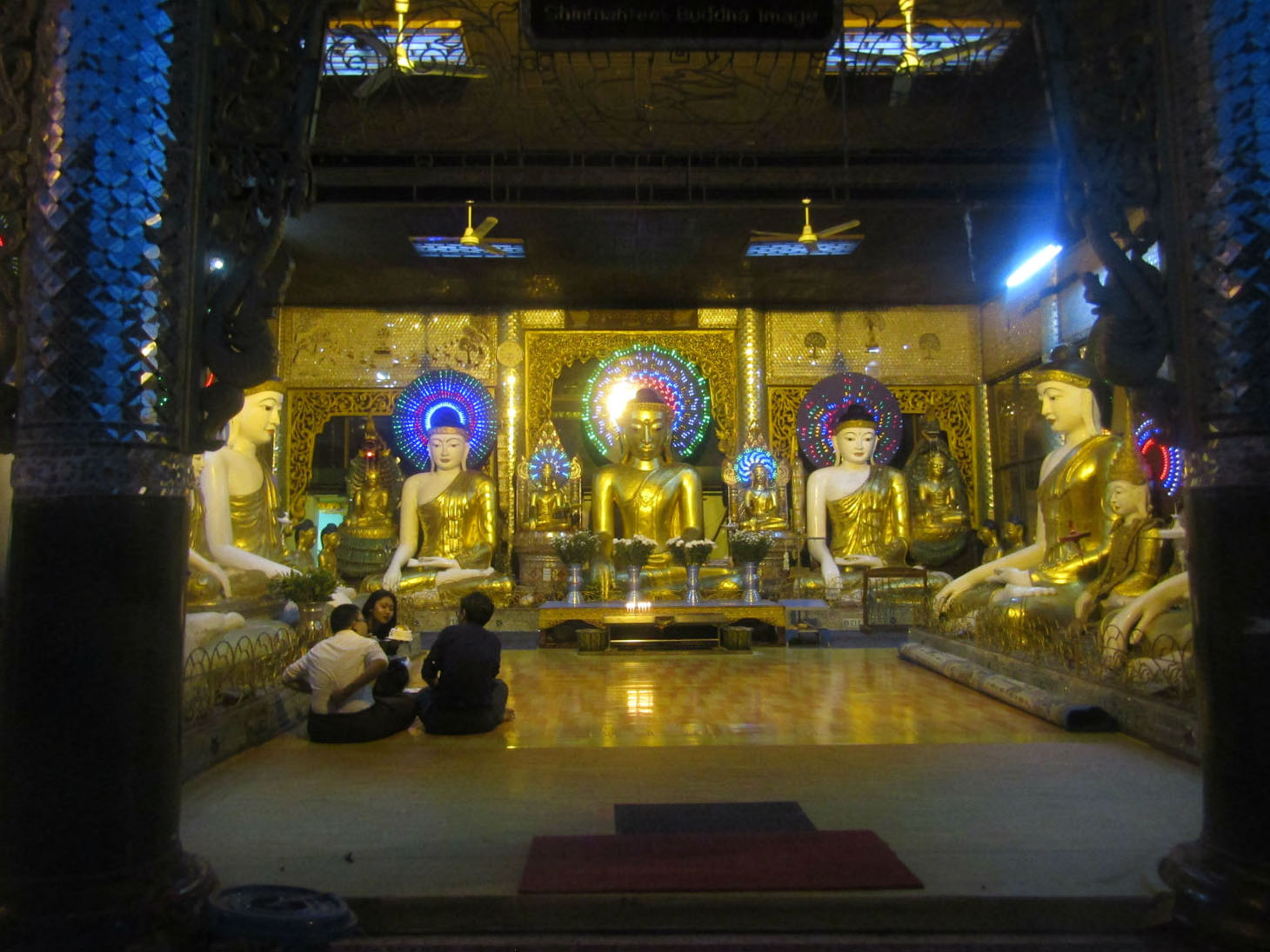 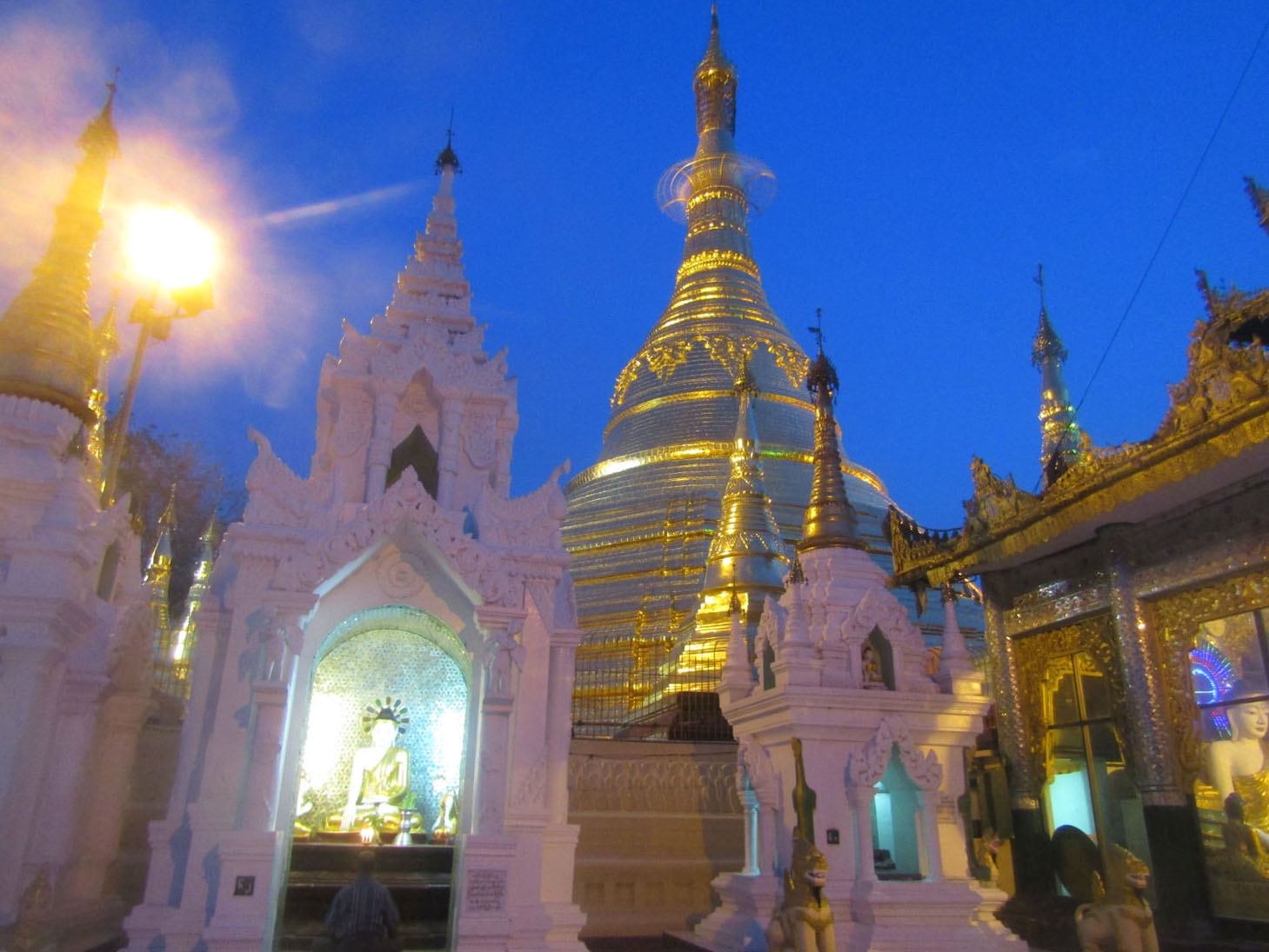 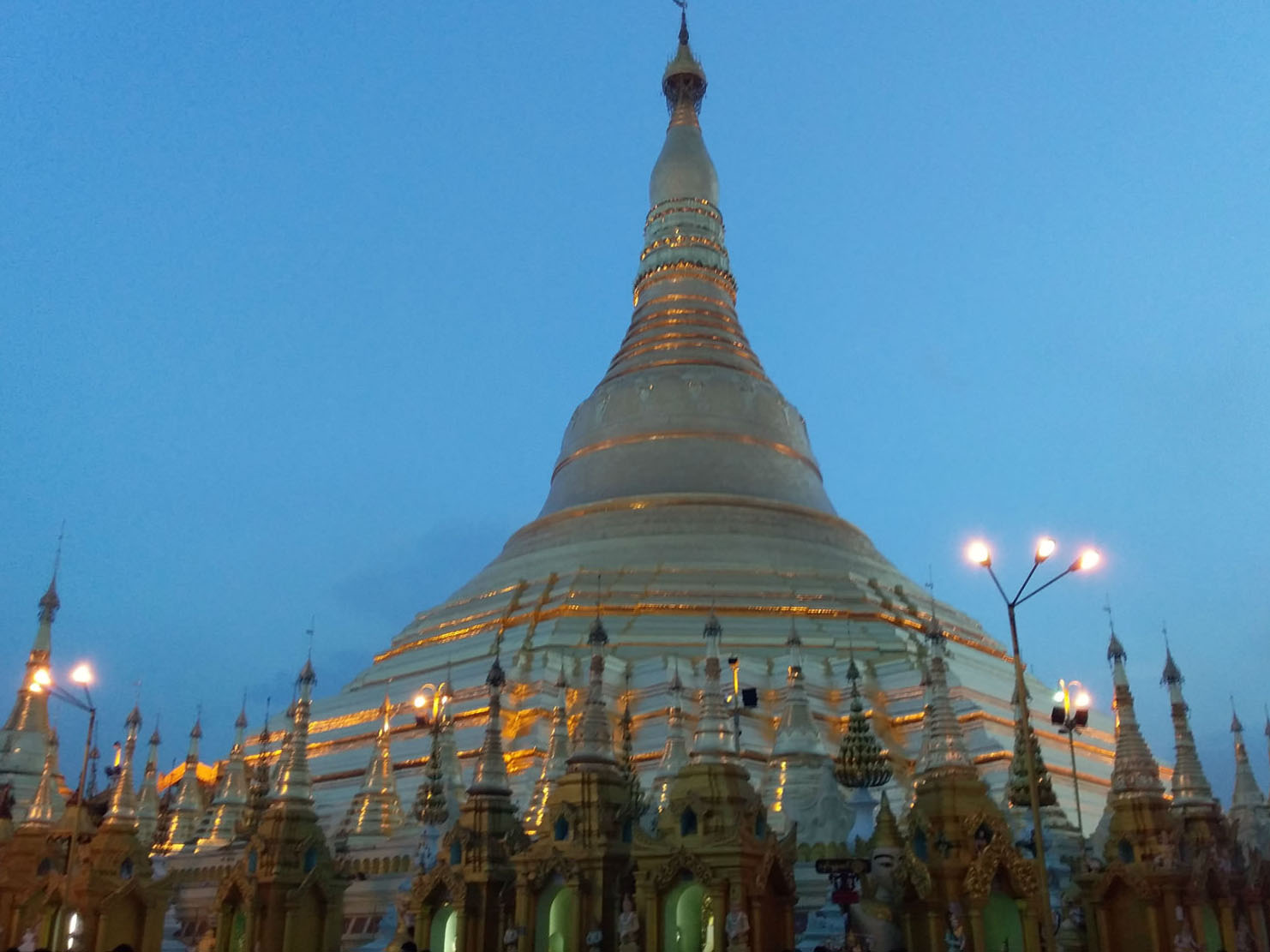 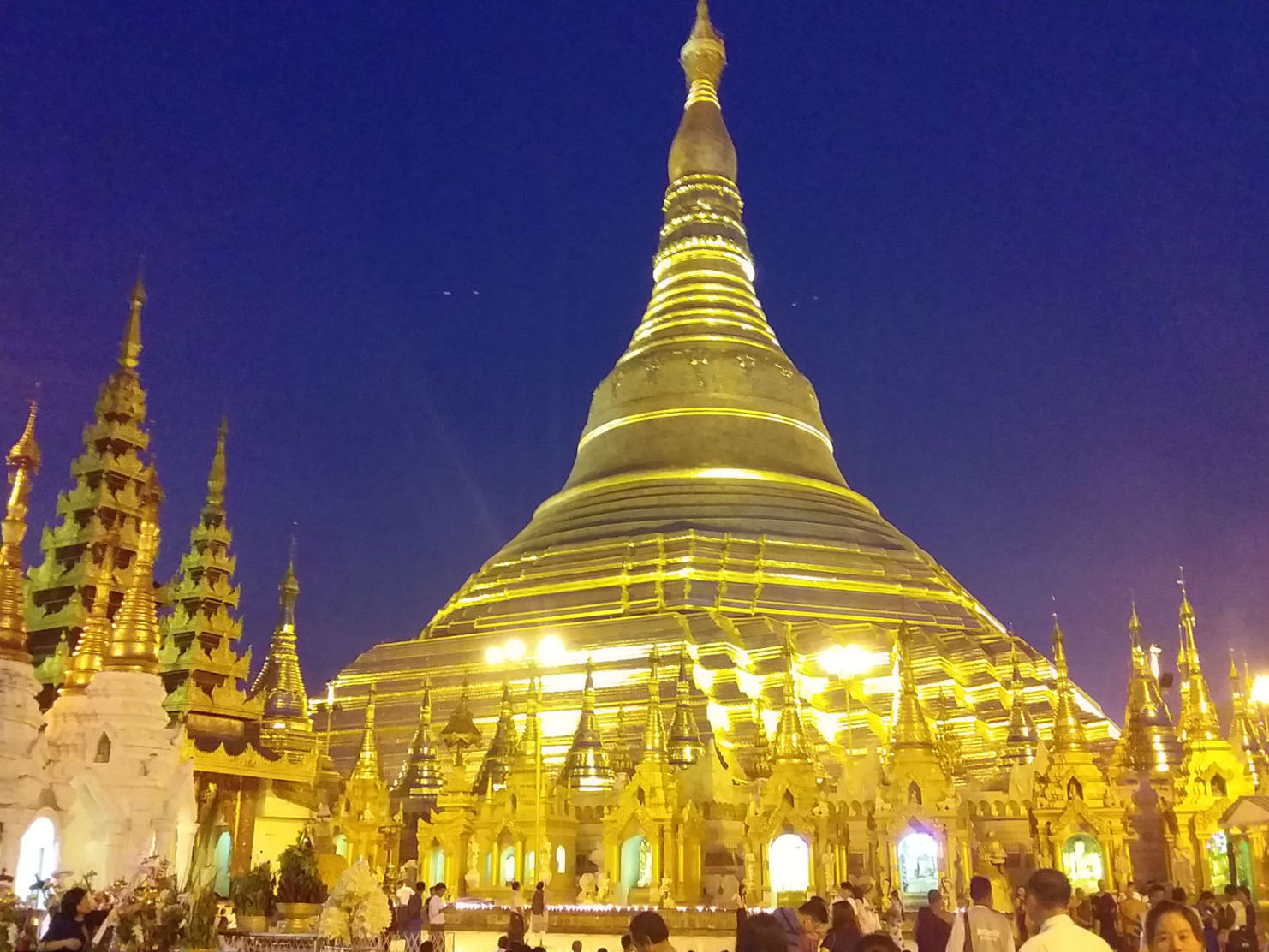 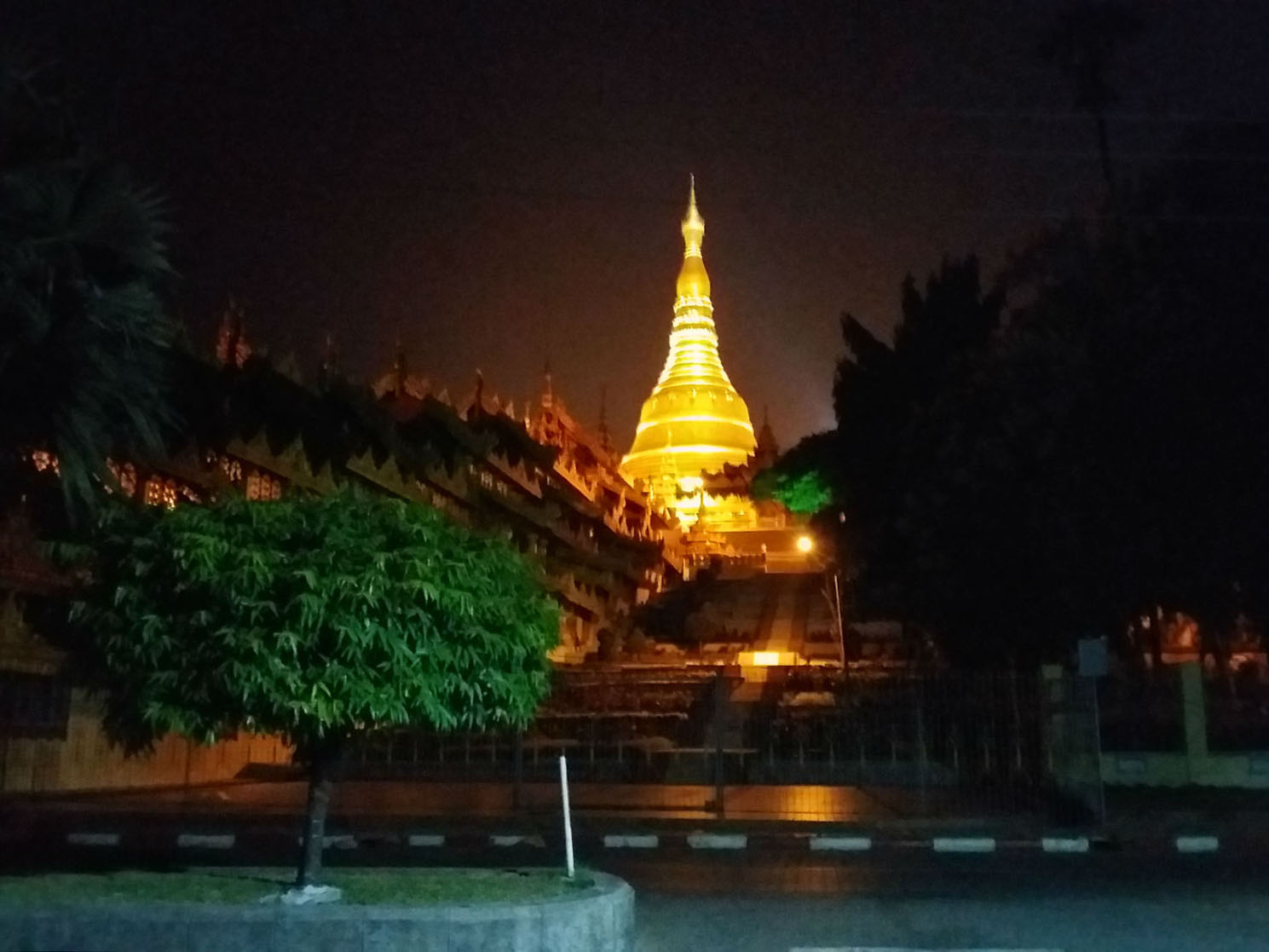 The Shwedagon Pagoda is located on a small hill in Dagon district. Evidently in the past, it could be accessed by long staircases which still exist but these days there is an elevator at the south, north and eastern entrances, while to the west is an escalator. At around 6pm we reach the pagoda via the eastern elevator and spend a good hour at this remarkable national treasure, the most holy Buddhist site in Myanmar. Much of the time is spent just wandering around in awe taking spectacular photographs as natural light fades and artificial light takes over creating remarkable contrasting colours on the pagoda and other buildings in the complex. It’s surely not to be missed.
At the time of my visit, all is peaceful and traditional Buddhist practices, e.g, removal of footwear is strictly observed as in other Buddhist nations. This was not always the case, e.g. the British showing complete disrespect for centuries of tradition while the military regime that succeeded it, banned public assembly; even for monks who were often arrested.
The Shwedagon Pagoda, officially named Shwedagon Zedi Daw and also known as the Great Dagon Pagoda and the Golden Pagoda, is a gilded stupa located in Yangon, Myanmar. The 326-foot-tall (99 m) pagoda is situated on Singuttara Hill, to the west of Kandawgyi Lake, and dominates the Yangon skyline.
Shwedagon Pagoda is believed to contain relics of the four previous Buddhas of the present kalpa. These relics include the staff of Kakusandha, the water filter of Koṇāgamana, a piece of the robe of Kassapa, and eight strands of hair from the head of Gautama.
Historians and archaeologists maintain that the pagoda was built by the Mon people between the 6th and 10th centuries AD. However, according to legend, the Shwedagon Pagoda was constructed more than 2,600 years ago, which would make it the oldest Buddhist stupa in the world.
The stupa fell into disrepair until the 14th century, when King Binnya U (1323–1384) rebuilt it to a height of 18 m (59 ft). A century later, Queen Binnya Thau (1453–1472) raised its height to 40 m (131 ft). She terraced the hill on which it stands, paved the top terrace with flagstones, and assigned land and hereditary slaves for its maintenance.
A series of earthquakes during the following centuries caused damage. The worst damage was caused by a 1768 earthquake that brought down the top of the stupa, but King Hsinbyushin later raised it to its current height of 99 m (325 ft). A new crown umbrella was donated by King Mindon Min in 1871 after the annexation of Lower Burma by the British. An earthquake of moderate intensity in October 1970 put the shaft of the crown umbrella visibly out of alignment. A scaffold was erected and extensive repairs were made.
From 22 February 2012 to 7 March 2012, devotees celebrated the annual Shwedagon Pagoda Festival for the first time since 1988, when it was banned by the governing State Law and Order Restoration Council.
The stupa's plinth is made of bricks covered with gold plates. Above the base are terraces that only monks and other males can access. Next is the bell-shaped part of the stupa. Above that is the turban, then the inverted alms bowl, inverted and upright lotus petals, the banana bud and then the umbrella crown. The crown is tipped with 5,448 diamonds and 2,317 rubies. Immediately before the diamond bud is a flag-shaped vane. The very top of the diamond bud is tipped with a 76 carat (15 g) diamond.
Connected…….. This excursion has allowed me to purchase a local SIM card for my phone, my internet access sorely missed at the moment. The intention then is to find something to eat. The options exclude the street food which is produced under unhygienic conditions but there are some restaurant we could try. Passing them by I just know that if the meals don’t look like Thai food or taste like Thai food then Katoon won’t touch it.
Soon we’re back near the hotel where just opposite is a burger restaurant that seems to be a substitute for McDonalds. Before we reach that, I’m really anxious to settle my nerves. After a topsy turvy day, I head into a local shop. Then bliss! Here is a selection of local and international beers that have eluded me all day. The 8.8% stout looks really inviting and it’s about to be tucked away in the fridge at Crystal Palace. So now, I presume, it’s off to the burger restaurant but no! Katoon produces life saving rations she brought from Thailand. Well I really don’t care as I reach for a beer and at least in these comfortable conditions, it’s a little piece of heaven. Next Page.